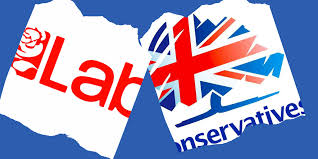 Since the Grey report the media has been concentrating on Johnson’s crumbling support among MPs. We’ve also seen the Unionists flexing their muscles (Poots’ removal of checks on U.K. goods in defiance of the Protocol and Paul Givan’s resignation) by the Unionists – something I don’t see as purely coincidental. And of course there is Starmer.

But it looks like Johnson is not going to give up so easily as he’s brought back Sir Lyndon Crosby to advise on his fight-back. This resolve may be motivated by a belief that this is his Churchillian moment but will resolve be enough in this instance? Despite a belief in his ability to withstand earlier challenges I’m now inclined to believe that it’s now only a matter of time for Johnson – or at least for what Johnson came to represent.

Nothing much has changed within the traditional Tory party that has brought this situation about. They always knew their man and they always knew his faults and foibles but they also always knew that he represented their best option to counter Corbyn’s appeal. He was the closest thing they had to a man who was popularly viewed as an unconventional Tory not encased by traditional Tory instincts. Someone in the media (it may have been a Guardian or a Spectator columnist) acknowledged this the other day when they said that he was never “a proper Tory”.

Although the columnist concerned could see that, he couldn’t see how it was precisely because Johnson was not “a proper Tory” that he was their man of the moment. Although his election meant that there was a possibility that he might eventually move the Tory party back to a pre-Thatcher position that would only have been possible if there was a sufficient base within the party for such a change. No such base existed but what did exist after the last general election was the new constituency of Red Wall voters. It was this rather than a foothold within the inherited Tory party that provided Johnson with his leverage. However, that leverage had always remained pure gall to the post-Thatcher party which it was only prepared to swallow as long as it could guarantee to keep any Corbyn threat at bay. As long as there remained even the slightest threat of a Corbyn resurgence Johnson was safe.

During this time the Tories continued to rely on Johnson’s appeal to hold up their end of the two-party see-saw. But because of Corbyn the fulcrum on which that see-saw now rested had to be recalibrated in way that involved a move from the conventional policy consensus to one on which the adherents of the old consensus were not prepared to sit and unless Corbyn and Johnson succeeded in pushing them off they would be expected to do all they could to restore the old balance. As we know neither man succeeded in doing that.

The arrival of Corbyn and Johnson didn’t mean that the adherents of the previous conventional policy consensus suddenly disappeared from either the Labour Party or the Tory Party. While those adherents on the Tory side had been placed in the position of only being able to respond to the advent of Corbyn, those on the Labour side were in the position of being able to directly work at a restoration of the old consensus. That work was led by the component of the Labour Party that most closely identified with the conventional policy consensus of the old see-saw – the PLP.

As a result of this work, an unprecedented alliance between the media, the career orientated PLP, EU Remainers (which it must be said, include most of the left) and ex-Blairites emerged and it did its job in keeping the shackles on Corbyn’s capacity to appeal to the electorate. But it was an uneasy alliance and the longer Corbyn retained an effective power base within the Labour Party the more chance there was that the alliance would break down. As long as that possibility remained the adherents of the conventional policy consensus within the Tory Party were compelled to continue to swallow the gall that was Johnson.

Then, along came Starmer and from that point onwards the clock was ticking for Johnson. He was no longer serving the purpose he was set up to serve as that purpose was no longer in a position to influence the levers of power within the Labour Party. Yet, despite this, there remained two things which continued to provide some protection for Johnson – the Red Wall voters and the continued support for Corbyn among grass root Labour members which continued to provide the threat of a Corbynite revival within Labour.

This meant that even after Corbyn was removed as Labour leader the Tories continued to be placed in the position of responding to events within Labour. This would continue until Starmer had advanced his agenda to the point that Labour was re-positioned in a way that re-established the two-party see-saw along the pre-Corbyn conventional policy arrangements.

My feeling is that this point has now been reached. Even if Johnson survives the latest challenge it will be on terms that are no longer dictated by a Corbyn legacy as interpreted within the Tory Party but on terms that comply with the advocates of the conventional policy consensus within the party.