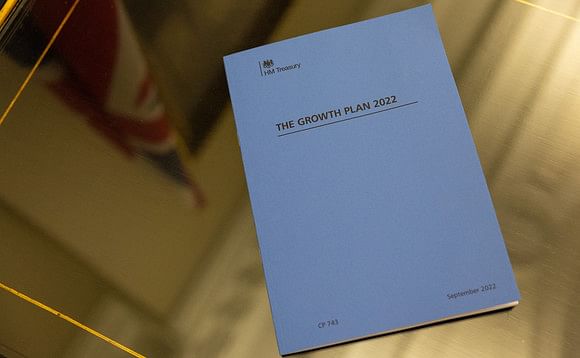 Did the then Chancellor of the Exchequer Kwarteng mention the need for extra borrowing when he presented his tax cutting plans to the House of Commons on 23 September? The answer is NO he didn’t – although opposition speakers (including Rachel Reeves) did assert that substantial extra borrowing would be necessary, Kwarteng never admitted that any extra borrowing would be required let alone specify how much.  However, earlier, on 7 September, a Treasury statement issued after he shared his plans with “market leaders” (ie bankers and other money men) contained the following:

“The Chancellor was clear this will mean necessary higher borrowing in the short-term whilst ensuring monetary stability and fiscal discipline over the medium term. He committed to ensuring the economy grows faster than our debts and keeping debt as a proportion of our economy on a downward path.”

The Chancellor did an extraordinary thing on 23 September – he presented half a budget, the pleasant half containing a cornucopia of tax cuts, and kept the world in the dark about the other half, saying only that it would be revealed “in due course”. Could there be a more effective recipe for financial uncertainty, for a falling pound and an increase in interest rates on government debt? And as if he hadn’t provoked enough uncertainty in his statement to the House of Commons, two days later in a BBC interview with Laura Kuensberg when talking about his tax cuts, he said “there’s more to come” without being specific.

The answer to this question is, in essence, YES. The markets were expected to “fill in the blanks” of his half a budget which was stage managed in a way that was contemptuous of the markets. It was quite naive to expect the markets not to conclude that what he was proposing would involve additional borrowing. This realisation, on top of the inherited cost of Covid and the anticipated burden of support for war in Ukraine, proved too much for economic orthodoxy. This orthodoxy says that expenditure by the state not financed by taxation or other sources of income has to be covered by borrowing. The markets reacted very badly and his days were numbered. Economic orthodoxy requires austerity as a way of ‘balancing the books’ as the main method of dealing with the way politics requires extra expenditure to meet contingencies such as COVID or whatever warmongering is currently deemed necessary.

But let’s not fool ourselves into thinking that in terms of the public’s grasp of economics that their default position isn’t one that is shared by the economic orthodoxy. While the public’s thinking isn’t dominated by that orthodoxy – it is prepared to accept that the government at times needs to go all out on borrowing – it views such borrowing as something that will need to be paid back later. The household budget view of state expenditure is both one that the ruling party and the Labour Party are anxious to hold onto and which is intuitively held by the public who have but a passing interest in the intricacies of state financing.

Covid was the recent occasion when the public were not only prepared to accept the need for increased government borrowing but was actually demanding it. In this instance, politics trumped the economics. This came on top of the perceived costs of Johnson’s “levelling up” political agenda – a borrowing agenda on which the public seemed to have adopted a neutral position, perhaps accepting that investment in the country’s infrastructure needed attention after more than ten years of austerity. But in formulating his “levelling up” policies Johnson showed that he was not fully in accord with the orthodoxy, or certainly not as fully in accord as it would have liked – he was after all a maverick politician. The Tory party itself was divided on the issue and some sections were deeply sceptical about Johnson’s aspirations. But the public’s support for Johnson couldn’t be prised away on the basis of a reassertion of a need for a return to austerity and so Johnson’s maverick nature – the nature that was originally viewed as an asset in countering Corbyn – came to be exploited as the means of neutralising him. Johnson’s already very well known qualities, on display in certain circumstances: laziness, disregard for rules and for truth, were portrayed as fatal character flaws disqualifying him for high office.

The reaction to the combination of the “distortions” of Johnson’s “levelling up” agenda and the cost of Covid showed that the economic orthodoxy may have to hold tight in the face of public fickleness but it won’t go away. Orthodoxy in the form of the Conservative parliamentary party and its supporters in the media, business and finance became the main instrument in first clipping the wings of Johnson’s ambitious “levelling up” agenda, then,in the aftermath of Covid, by exploiting Johnson’s maverick personality at a time when the destruction of Corbyn no longer provided political protection for him, in order to bring him down. Sunak, his chancellor was a key figure in clipping his wings and Johnson was either too weak or too lazy to deal with this threat.

But even after Johnson was politically neutralised – and remember this happened way before he officially resigned – such was the residual political inheritance of the Covid emergency that the public remained sceptical as to the need for austerity. The feeling that the books may need to be balanced but not necessarily yet had gained enough traction to offer the prospect that this could become a new normal way of thinking. The need to support the US and the Ukraine in their war against Russia  added to the orthodoxy’s nightmare. The idea that the good fight would need to be funded by yet more increases in government spending would inevitably bolster the continuing public scepticism about any immediate need to balance the books.

Then Kwarteng’s novel experiment arrived on the scene. The thing about the markets is that they do understand politics. Modern capitalism revolves around numerous teams of analysts, and economic models that attempt to anticipate the impact of political developments on the markets. Unusual political developments are factored into their calculations. So it was quite possible for the markets to retain a critical stability throughout Covid and more likely continue to retain a stability of sorts throughout the war in Ukraine. Kwarteng’s problem wasn’t so much that his policies inevitably imposed increased government borrowing. That, after all, was already happening. His problem was that he failed to link it to a political and economic rationale and this, combined with the methods he used in both dismissing the prevailing mechanisms and appearing either not to know or deliberately concealing the impact of his policies on government borrowing, lost him the confidence of the markets.

The resultant turmoil in the markets proved to be a godsend for the economic orthodoxy as it managed to frighten the public out of their “illusion” that the task of balancing the budget could be deferred indefinitely. Whereas before Kwarteng austerity was seen as an unlikely political “sell” to the electorate it’s now become a necessary one. The economic orthodoxy can now rest content in the knowledge that all is, once more, well in its world. The Labour Party in Parliament is doing all it can to bolster this belief.