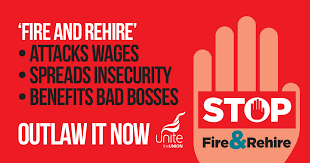 During the Covid pandemic firms like British Airways fired part of their staff and rehired them on reduced terms and conditions.  The Labour MP Barry Gardiner presented a Private Member’s Bill to end this practice.

No MP on either side defended the practice, but still the Bill was not passed.  Conservatives argued that the Bill was not the best way to end this ‘abhorrent practice’.    Read their speeches and note their new found devotion to higher wages and higher skills.

One important point made is that employment tribunals, crucial for the implementation of employment law, are overwhelmed with a huge waiting list of cases.

The hon. Member for Feltham and Heston (Seema Malhotra) raised a point about the aviation sector. The conduct of British Airways was poor, but there is an important issue at stake. If in primary legislation the risks of fire and rehire are so great that employers are more inclined to lay people off, think what that would mean for airline pilots, for example. Airline pilots must fly within a two-year period to retain their flying licence. If they are sacked by British Airways at a time when the entire travel sector is struggling badly, they would be very unlikely to get a job and it could easily be two years. It is not just the loss of a job; it is the loss of an entire career. We need to tread very carefully when we consider primary legislation in the area of fire and rehire.  […]

What we are primarily looking at is employers that have larger, unionised workforces. I am not sure how many employers it would engage, but the short point is that Conservative Members want a solution that does not make an existing problem worse, drive redundancies or lead to more business failures. Fire and rehire must be a genuine option of last resort when a negotiated settlement cannot be reached, when the business is on the brink of insolvency and when the alternative is layoffs.

Reply: employers should be required to set the criteria that they would exercise in deciding when to restore workers’ pay.

Objection:  [the agenda of the parent company of BA was] was about driving profits, not about saving the jobs and livelihoods of people, particularly women in their 50s and those towards the end of their careers. It was a restructuring brought in under the guise of fire and rehire.

Answer:  the company was on thin ice financially.

Fire and rehire is a cross-party issue that Conservatives in our constituencies are dealing with on the ground as well. In Rother Valley, Adam Tinsley, the councillor for Maltby East, fought against Sheffield University, which was going to use fire and rehire, as a Unite the union representative. I commend him for that. Let us take some of the partisanship out of the debate and work together to solve the problem.

Is not one of the big differences between what we are doing in the UK and what they do on the continent, that on the continent they have mass immigration across the EU, which is driving down wages, whereas in this country, now that we have left the EU, we can look after workers better, not rely on poorly paid labourers and actually get high quality high-skilled jobs. That is the fundamental difference: we want better jobs and better pay for people, rather than relying on cheap labour.

I am of course totally opposed to fire and rehire where a profitable business that does not need to restructure is taking advantage of a particular situation. Opposition Members are trying to cover those situations, and who would not want to do that? Such conduct is absolutely wrong and a stain on business, and every Minister I have heard at the Dispatch Box has criticised it.

There is only one thing worse than fire and rehire, and that is fire and not rehire. […]

Who would not agree with skilling up our workforce? Of course we need to skill up our workforce and good employers will do that to enhance productivity, particularly if we move to a higher-wage, higher-skilled economy.

Ministers, however, have done what they have done every time fire and rehire has been raised with them: they have clucked sympathetically, wrung their hands at how horribly ungentlemanly these companies are being, and said how much they sympathise with the workers who are being blackmailed, and have then proceeded to do absolutely nothing to address this in legislation. Every Minister from the Prime Minister down seems to have forgotten that it is the Government who speak from the Dispatch Box, and that they have the power to act to protect workers rather than murmuring sympathy for the benefit of Hansard and no one else.

Capitalism is good. Capitalism creates. Capitalism creates higher wages, better skills, stronger businesses and a more global Britain. It is through capitalism that this country has grown the strength to provide public services for so many of our people. It is through capitalism that we have been able to have the highest increases in wages for the lowest paid that we have had for decades. It is capitalism that gives hope to people who want to start their own business. It is capitalism that is going to close the gender pay gap and the discrimination against people based on colour, because capitalism seeks out talent. It is upon the captains of capitalism—the women and men who lead our businesses—who understand how to get that great concoction of people and investment to create wealth and security, that we should be entrusting the responsibilities to act ethically and responsibly.

That session ended with no vote being taken.