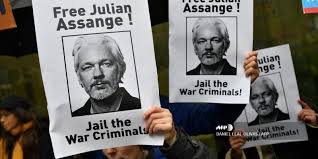 Assange: the most important press freedom case of the 21st century

Punishment by process is the US policy on Julian Assange, just as the failure he predicted in Afghanistan comes true, writes JOHN REES

IN THE mirror-world which is the Julian Assange case, justice is neither transparent nor impartial. And it is certainly not swift.

Assange is now in his third year of detention in Belmarsh High Security prison. He has not been convicted of anything. His case has not yet staggered from the Magistrate’s Court, the lowest court in the land, to the Appeal Court. It has never and will never appear before a jury.

Last week two High Court judges, in a hearing about what will be allowed to be appealed by the United States government when the full appeal is heard on October 27-28 , decided that the previous High Court judge and the magistrate in the Magistrate’s Court were wrong to rule that the US could not raise, once again, questions about Assange’s mental condition and assurances that the US prison system is really a health spa in which Assange will be under no risk of suicide.

No doubt if they are denied a success at appeal the US will find more ways to keep Assange under lock and key in what is now amounting to punishment by process. Indeed, some years ago the right-wing US think tank Stratfor recommended exactly this tactic to the government in the Assange case.

This is an effective denial of Habeas Corpus, the legal principle that citizens cannot be imprisoned without trial for long periods. It is a process which is an abuse of the law.

If Assange were ever to be extradited, far worse than this would follow: lengthy pre-trial detention in a system designated as “oppressive” by the judge at Westminster Magistrate’s Court whose ruling against extradition is being appealed on October 27-28. And then a possible 175-year sentence if he is found guilty.

And for what? Telling the truth about the wars in Afghanistan and Iraq. So there is a deep irony that this prosecution is taking place across the same time period that the US lost control of Afghanistan and was forced to withdraw in the face of revitalised Taliban.

If only the justice system in London could hear the Assange case with the same speed that the Taliban took Kabul.

But for now all eyes must be focused on the appeal at the High Court at the end of October. Public pressure is the only thing that can end the deliberate, punitive incarceration of Assange. The entire labour movement and progressive left must rise to the occasion. This is, when all is said and done, the most important press freedom case of the 21st century.

John Rees is a national officer of the Stop the War Coalition, an academic and writer — Twitter @JohnWRees.