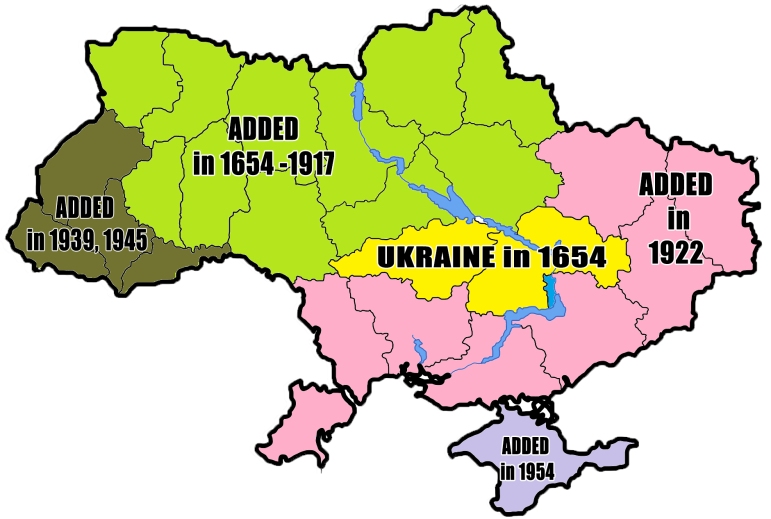 An aspect of Gorbachev’s disastrous arrangement with NATO on German reunification was the implications it went on to have for the borders between Russia and its post-Soviet neighbouring countries. However the continuing existence of that border arrangement would not have been so problematic had the US honoured the unwritten agreement with Gorbachev not to move NATO eastwards. It was only when that agreement was dishonoured by Clinton that those Soviet era borders became such a problem for Russia.

It’s interesting to see one of the Romanian political elite now looking at this issue from the perspective of Romanian nationalism. That this aspect of the post-Soviet geographic inheritance cannot be done without opening up its implication for the current Russian-Ukrainian conflict makes it such controversial subject for Kiev. No wonder that it’s trying to shut down discussion on the subject.

But the issue for Russia in all of this is that the same NATO expansion makes it difficult for it to focus its political rationale on a rearrangement of its own borders along lines that take account of the unnatural nature of those post-Soviet borders. The reason for this is that Yeltsin never bothered to undertake such a task when he permitted the break up of the Soviet Union.

It was only at that point when none of the ex-Soviet republics had yet joined NATO that Russia was in a position to cede Russian territory to those republics as part of a border re-arrangement along more natural lines. With those ex-Soviet republics now part of NATO such concessions make it more difficult for Russia to make. I suspect that is the reason why Russia does not now justify a border rearrangement on the basis of the unnatural nature of the Soviet constructed borders.

The Ukrainian Embassy in Romania has accused the EU country’s former foreign minister, Andrei Marga, of undermining the “basic principles of international law,” after he claimed that the borders of modern Ukraine are “unnatural,” and suggested that Kiev should cede parts of its territory to the neighboring states.

The embassy has voiced its “regret” that a former top official of a “democratic European state”would make a statement that is not just “unacceptable under any circumstances,” but also represents a “particularly blatant deviation at a time when Ukraine heroically defends its independence and the security of Europe.”

The former Romanian diplomat made the controversial remark earlier on Saturday at the Alba Transylvania book fair, where he presented his new book ‘The Fate of Democracy’ and suggested that leading world powers should come together and agree on a new “security structure” in Europe and worldwide.

“We are in a very special situation here, and I take this with all responsibility, Ukraine exists in unnatural borders. It should cede Transcarpathia to Hungary, Galicia to Poland, Bukovina to Romania, Donbass and Crimea to Russia. These are the territories of other countries,” he said, listing the regions that were incorporated into then-Soviet Ukraine by the Communists, but which he thinks should be relinquished.

Over the course of the ongoing conflict between Russia and Ukraine, Kiev has repeatedly vowed to return to its control all of the territories it ended up with following the collapse of the Soviet Union.”

The situation looks increasingly like a struggle between the American eagle and the Russian bear that has all the potential for mutual destruction, with the European bunny rabbit likely to be crushed in the process.

How long can Europe continue to underpin this madness? But, clearly, the attacks on the pipelines Nord Stream One and Two remove the chances of the opposition gravitating towards a practical alternative.