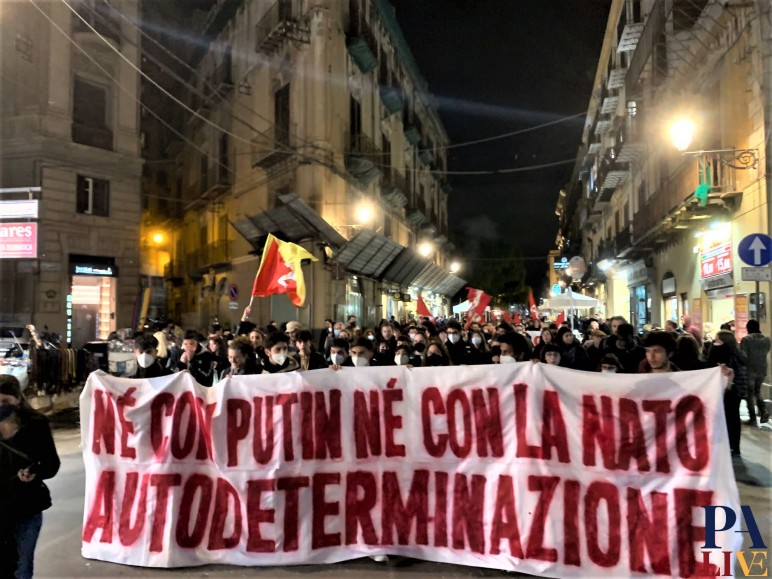 Marco Travaglio, Editor of Il  Fatto Quotidiano, a newspaper to the left of la Repubblica, commenced his editorial on Putin by taking a slogan from a pacifist demo that happened in March. “Né con Putin, Né con Nato” Not with Putin nor with NATO. “I have always condemned Vladimir Putin’s regime, ever since Silvio Berlusconi went to flatter him and say that he was “a gift from God.”

The European Right has made many connections with Russia. Matteo Salvini, The Lega leader, is Italy’s very prominent supporter of Russia. He is a man of visual symbols and at one point, until the Pope expressed his disapproval, he frequently brandished a crucifix. In the past Salvini has been seen wearing two versions of T-shirts expressing his enthusiasm for Putin. However, following the Ukraine invasion one bit back. Salvini tried to make a face-saving visit to Poland. When he arrived at Przemysl, the Mayor, Wojciech Bakun, waved one of the shirts in utter condemnation. Salvini’s trip had been made to express his pacifism, but, said La Repubblica, “ he transformed himself into a mockery”. (09/03/22)

Matteo Salvini and his La Lega, plus some members of M5S (Five Star Movement), have long made supportive contact with Putin and his Party, United Russia. In April 2019 Claudio Gatti wrote in La Repubblica that Moscow had actually listed the ways that this “long flirt” could help promote Russian interests in Italy. They included actions to discredit events or people who opposed the external political strategies of Russia; the encouragement of visits by politicians and influential people to Putin or his senior party members; the condemnation of anti-Russian sanctions; the promotion within regional, national and European circles of favourable comment about the annexation of the Crimea

The Lega at large supported what can only be called Russian demands with comments such as: “Russia has many friends in Italy, more than you imagined” (Senator Segio Divina) or “admiration for the independence (of Crimea), is a theme dear to The Lega’s heart … Russia is not a rogue state”. (MP Claudio Borghi)

One of these friends was Gianluca Savoini, now infamous for this so-called Moscopoli affair. Savoini has always had extreme right and fascist political beliefs and writes for the far-right L’Indipendente. He was a spokeperson for Matteo Salvini when the latter started in politics. He later went on to found the Lombardy-Russia Association. Buzzfeed and L’Espresso (2019) broke the story that Savoini and others had met with members of Putin’s United Russia Party to discuss inducements to be given in return for their Italian help. A photo of one meeting at Moscow’s Metropole Hotel clearly shows him there. At first Salvini denied that he knew Savoini and the saga is highly discreditable. In short, a deal was cooked up to sell oil at a discount to Eni, the Italian energy company. The 58m Euro difference in price would then slide quietly to La Lega in time to help their 2019 Euro election funds. The Russians would also receive a cut at some point. Savoini is currently under investigation for international corruption.

There is an undercurrent of anti-NATO feeling in Italy, certainly manifesting itself in The Lega but also in M5S. Parliament is currently (end March) debating the continuation of and a possible rise in defence spending, currently 2% ofPil (GDP). Ex-Premier Giuseppe Conte, who is running for election as M5S President, recently said that he supported funding to rapidly increase green energy production rather than defence spending. This pointedly states his opposing position to the previous M5S leader Luigi Di Maio, who supports Draghi’s continuation or increase of defence spending. Conte and Di Maio now have an antagonistic relationship which is splitting the Movement.

The sending of arms to Ukraine was also considered during these defence debates. Vito Petrocelli, No 3 in M5S and Head of the External Commission spoke strongly about his opposition and how sending arms would make Italy a “co-belligerent”. He was criticised loudly during and after his speech. He said, as a dig at NATO, his stand was not out of support for Putin, but an act of pacifism, unlike the NATO blue helmets who had looked the other way during the massacre at Srebenica. A contradictory position if there ever was one. It must be said that Petrocelli is particularly close to Sergey Razov the Russian Ambassador – more of him later.

Ukraine’s Prime Minister Vladimir Zelensky spoke to the Italian Parliament and Salvini asked his parliamentarians to be present. Not all complied and among them was Lega’s extreme nationalist Simone Pillon. In context, Lega Nord, TheLega‘s previous incarnation, had pressed for independence for the North of Italy. Reading Pillon’s Wikipedia Italian entry gives the senses a shock because first there is a Wiki-warning and what follows is written in the Lombard dialect, rather than Italian.

Yet more – On 25 March 2022 La Stampa ran an article: “IF KILLING THE TYRANT IS THE ONLY OPTION”. Journalist Domenico Quirico considered whether it would be a good thing morally and practically to kill Putin. He was a little ambiguous in his reasoning and didn’t directly advocate a killing. He said that killing a “dictator” was no different to the practice of “terrorism” and possibly could be a “an effective trigger to a worse chaos”.

The Russian Ambassador, Sergey Razov, was obviously outraged and said that he would be suing the paper: “Needless to say, this goes against the rules of journalism and morality.” Mario Calabresi, La Stampa’s Editor, put out a video saying that: “we love freedom and will continue to defend it despite all the threats and intimidation.”

There is obviously more to come on the La Stampa story. Also on the votes for defence spending, which could cause the Italian Government to fall. Plus, will Giuseppe Conte be elected as President of M5S? He is the only candidate but must receive more than 50.1% of the members’ support. Both Mario Draghi and Conte continue to carry the highest level of support as the country’s leaders, followed by Fratelli d’Italia‘s Giorgia Meloni. Polls differ numerically but these are consistent ratings. The Foundation for Subsidiarity think tank , Il sussidario, rates Matteo Salvini’s position as “a flop.”

It seems that Italy could be condemned for these liaisons and corrupt practices, until reference is made to similar happenings in other European countries. Obviously, the UK should look critically and openly at its own Russian involvements.

Finally: a last thought: 86 year old Silvio Berlusconi recently had a curious, informal (ie: not legal) wedding to his girlfriend. Speculation is that she is pregnant. Is this another of Berlusconi’s gifts from God?