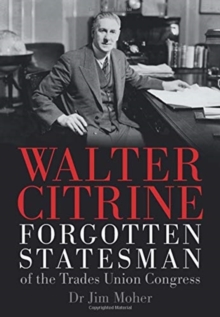 Dr Jim Moher’s biography, Walter Citrine: Forgotten Statesman of the Trades Union Congress, was profiled by its author in the March issue of Labour Affairs. On 24 March a book launch was held, in the form of a Zoom meeting, for which 160 people pre-registered and 120 attended, including myself. The launch was chaired by John Edmonds, former General Secretary, 1986-2003,  of the GMB union. The interlocutor was John Monks, former General Secretary, 1993-2003, of the Trades Union Congress, and subsequently General Secretary, 2003-2011, of the European Trade Confederation.

As the interlocutor, Monks asked the author to address a series of themes, more or less along the lines of his March article, but segmented. After the presentation of each theme, Edmonds then put pertinent questions posed by those attending the launch. This alternating between each theme and the follow-on Q and A sessions allowed for a rounded profile of Citrine to emerge.

The author had thoroughly researched the meticulous diaries and files that Citrine had maintained over the course of six decades. Moher’s objective was to rescue Citrine’s reputation, not only from from the bad press he was so often given by the British Left, but also from some distortions of good points that others acknowledged. So it was not only the hostility of Nye Bevan that had to be addressed. For far too long Citrine had been overshadowed by Ernest Bevin with whom he had worked so closely and effectively during the 1920s and 1930s, but who Citrine felt had let the international trade union movement down on the foundation of the United Nations in 1945.

Beginning as a rank and file member of the ETU and becoming an official from from 1914, Citrine had started out as both a syndicalist and a militant. For example, he had given support to the 1919 police strike. He also believed in industrial action for political ends. Citrine became TUC Assistant General Secretary in 1924 and its General Secretary from 1926 to 1945. He was to be very much influenced by the writings of JM Keynes, most notably The Economic Consequences of the Peace (1919) and The Economic Consequences of Mr Churchill (1925). It was Churchill’s decision to go back on the gold standard, with too high an exchange rate for Sterling, that provoked the crisis in the coal industry and the 1926 General Strike.

The author’s response to participants’ questions on the relationship between the TUC and its affiliated unions focused on what lessons Citrine felt needed to be learned from that nine day General Strike, involving two million workers, and the controversies surrounding its confused ending. Citrine believed that the commitment of the whole trade union movement to engage in strike action in support of the miners carried with it a quid pro quo that should have allowed Citrine negotiate on their behalf, but such permission was refused. The Communist Party accused Citrine of betrayal. Unlike the CPGB, neither Citrine nor Bevin viewed the General Strike as having the revolutionary potential to challenge state power. And that experience led them to face down both the CP itself and its Minority Movement in the unions.

Jim Moher pointed out, however, that Citrine did not see the General Strike as a complete failure, but rather took note of the fact that it had put the wind up the Government. But to be in a position to do so ever again required the unity of the trade union movement. Citrine held that Hitler’s rise to power in Germany had been assisted by the movement being split between social democrats and communists. In facing down the Minority Movement, Citrine believed  that his success in in maintaining the unity of the British trade union movement had left it best equipped to counteract the appeal to sections of the working class of Mosley’s British Union of Fascists.

Citrine also served as President of the International Federation of Trade Unions from 1928 to 1945, whose headquarters had been located in Berlin from 1931 to 1933. The author spoke of how being an eyewitness to Hitler’s rise to power prompted him to establish a World Anti-Nazi Council, of which he became Chairman. I myself already knew that Citrine had been opposed to trade union funds being used to support the families of even Labour Party members fighting in the ranks of the International Brigades in the Spanish Anti-Fascist War, on the grounds that the International Brigades were communist controlled. I asked the author if Citrine had taken a stand regarding the defence of the Spanish Republic. Did he, like Bevin, support the British Government sponsored “Non Intervention Pact” which strangled the Spanish Republic’s capacity to effectively arm itself against the massive Fascist military onslaught from Franco, Mussolini and Hitler?

My viewpoint on Bevin had been formed by his most worthy successor as an outstanding TGWU leader in his own right, Jack Jones, and his autobiography Union Man. Jones wrote: “My respect for Ernie Bevin increased each time he denounced Fascism and I began to appreciate the thinking behind the formation of the TGWU as a practical means of meeting the needs of ordinary workers over a range of industries… In August 1936 Ernest Bevin praised ‘the heroic struggle being carried on by the workers of Spain to save their democratic regime’.” But effective union support for Spanish Republic was a different matter: “The Government and many Labour leaders, dithered and dallied with their policy of ‘non-intervention’… The absence of mainstream Labour and trade union speakers (at ‘Aid Spain’ meetings) worried me and provided ammunition for left-wing critics and the Communist Party. I was disappointed by the efforts of my own union and the TUC. Financial support from that quarter was negligible. I had the feeling that people in high places were washing their hands of the whole business.”

Jones volunteered for the International Brigades in 1938: “I called on Ernest Bevin, told that he would like to see me. He asked me why I was going to Spain and listened with great attention. ‘Have the communists been after you?’ he asked. ‘No’, I replied, ‘the issue affects a lot more people than the communists.’ He nodded assent, but I got the impression he was pessimistic about Spain and probably felt my going to Spain was just another youthful indiscretion. At one stage he growled: ‘Britain must stand up to these dictators, but we need to be stronger.’ He said that he hoped everything would go well for me, and that when I got there I should meet the Spanish unions, who might help me. He then dictated a letter to the UGT. While the letter was being typed he talked about the Spaniards he had met in the International Transport Workers Federation. I departed with the letter, mightily pleased that Bevin had been so friendly but still disappointed that he had not done more for Spain.”

See http://free-downloads.atholbooks.org/pamphlets/Jack_Jones_Vindicated.pdf for my Bevin Society booklet on Jack Jones.

In reply to my question, Jim Moher suggested that Citrine’s stand on Spain had been stronger than I hitherto assumed. The resolution adopted by the International Federation of Trade Unions executive meeting that Citrine chaired in December 1936 stated that, in view of the military presence of the German and Italian Fascist powers in Spain, “there can be no question of equality between the legal Government of the Spanish Republic and the bloodstained hands of the rebel generals, and the Government is fully entitled to obtain all the means necessary for its defence”. The author pointed out that as “Non Intervention” came increasingly to be seen as an illusion, Citrine had directly lobbied British Foreign Secretary Eden to end the arms embargo on the Spanish Republic, but to no avail.

The author did speak of the wartime estrangement of Citrine and Bevin and the resulting post-War departure of Citrine from the TUC, but he did not unnecessarily dwell on it. Thereafter Citrine became a member of the National Coal Board, and Chairman of of the British Electricity Authority, following the nationalisation of those industries by the 1945 Labour Government. What the author did emphasise, both in response to questions and in his concluding remarks, was what Citrine and Bevin had politically achieved together in the 1930s. The experience of the 1924 and 1929 Labour Governments had ended in disaster. It was the unions who rebuilt the Labour Party, but not in any behind-the-scenes manner. This rebuilding had to be undertaken transparently, with liaison and consultation between the Labour Party and the TUC being formalised through the National Council of Labour, established at the behest of Citrine and Bevin. It was through this mechanism that the blueprint for the 1945 Labour Government had already been put in place by 1940. At the close of a very informative book launch, Jim Moher suggested that it was probably this aspect of his biography of Citrine that had particular lessons for the present.